In the second tutorial about low-level Arduino programming, we will use Port D, i.e. digital pins 0-7. Port D’s pins 0 and 1 are used for serial communication and most people do not want to use them for anything else. Things can get weird if you play with them. So the usual practice is not to touch 0 and 1 bits of the DDRD and PORTD registry. In order to do this right, we need some foreknowledge about bits mathematics.

After a brief introduction about bits, we will program the push button and LED. If you have skipped the first lesson, return here.

You already know that the binary system consists of stacks of 0s and 1s, along with the fact that 1 byte has 8 bits. If we are talking about registers of 8bit microcontrollers, each registry has 8 bits numerated from 0 to 7, from right to left. When we talked about registers controlling GPIO pins, we mentioned how we can change their state in different number systems. Before we proceed, let’s repeat the conversion.

Hexadecimal system is most commonly used when changing states of registers in microcontrollers. We will divide the 8bit binary number into two 4bit, in bits 7-4 and 3-0, each will be separately potentiated with numbers 1,2,4 and 8, from left to right. Here is how it looks like in our example:

Sum of the 7-4 registry’s results is 2, while 3-0’s sum is equal to 0. We write the result down in a way that we write the first number next to the second one, i.e. 20. In order to recognize it as hexadecimal, we will write it as 0x20 in Arduino.

Let’s see what happens when the result of 4 bits is greater than 9, in an example:

Let’s process the bitwise operators which are necessary for this tutorial and in general when using bits.

Connect the push button and LED according to the Fritzing scheme: 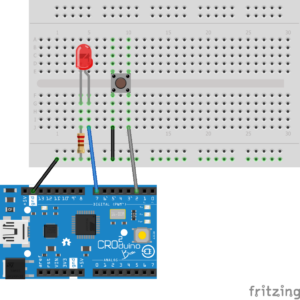 We have connected the LED to D7, the push button to D2. Let’s set the D7 pin as output, and D2 as input without changing states of D0 and D1 pins we use for serial communication. We will turn on an internal pull-up resistor to pin D2, in order to avoid floating of the pin. Insert the code below to Arduino IDE and try it out:

In the following tutorial we will see how to write our own delay() function and test the speed of program’s performance using Arduino library and the way we are doing it at the moment.

Since void setup() is performed just once, we can make it easier for us by using Arduino pin mode() function for this part. Just a reminder how this looks like:

Products used in this tutorial