Transistors are active semiconductor elements and they build many electronic and integrated circuits. In analog circuits, they are used for amplifying the electronic signal, and in digital circuits as switches. The essential operation principle of transistors is controlling higher output current using lower input current or voltage on the control electrode. If we control the transistor using current, we are talking about the bipolar (BJT) transistor, and if we control it using voltage, then we are talking about unipolar (FET) transistor.

Semiconductors are mostly made of silicon(Si), there is a lot of it on Earth and it is cheap, and some other materials. Silicon atom has 4 valence electrons (electrons in the outer shell), and when it connects to other silicon atoms it makes strong covalent bonds. This type of structure can not conduct current (unless we bring external energy in the form of heat) because there are no more free electrons, in order to get current we must have free electrons that can move through the material. That is why we dope silicon with different materials which allow electron motion. Check an interesting video about “What is a semiconductor?”

In the picture we can see the structure of an ordinary silicon, without impurites and two images with “impurities” (other materials). We have already mentioned that, to conduct current, we need electrons that can move through the material in any way. One method for obtaining free electrons is shown in the middle by the phosphorus atom (yellow color), which has 5 valence electrons. 4 of these 5 will form covalent bonds and 1 remains a free electron. This type of semiconductors, where the majority of electrons are charge carriers, is called the N-type semiconductor, and besides phosphorus(P), you can use arsenic(As) and antimony(Sb). In the picture on the right, another type of semiconductor performance is visible. We can see that one atom lacks 1 electron for forming the fourth covalent bond with the neighboring silicon and in that place it leaves a “hole”. These holes allow other electrons from covalent bonds to jump in to that spot, and leave holes in their own. What is most important is the fact that it allows electron movement. This type of semiconductor, where the majority of holes are charge carriers is called the P-type semiconductor. Besides boron(B), you can use aluminium(Al) and gallium(Ga).

Bipolar transistors are constructed in a way that between two layers of the same type (P or N) there is a thinner layer of the opposite type of conductivity. There are two types of bipolar transistors: NPN and PNP (less commonly used). They have 3 pins: the collector(C), the base(B) and the emitter(E) and this type of transistors is controlled by current, which means that the lower current passing through the base controls the higher current of the collector and is approximately Ic=β⋅Ib. β coefficient is a factor of the DC current power and can range from several dozen to several hundred, depending on the making of the transistor. This type of characteristic can serve well, for example, when we want to control higher power load using Croduino. Bipolar transistors are commonly used for making electronic signal amplifiers, where, depending on the mutual collector, base or emitter connection, current, voltage or both are increased. We can also make logical circuits using transistors.

In the right image we can see the arrangement of pins for an NPN bipolar transistor. This is not always the case, and make sure to check your transistor’s datasheet.

In order to understand something, it is best to try it out in practice. This can also be done using only the switch, and the purpose is to understand the principle and get the idea of how the transistor works. You can bring e.g. +3.3V to the upper red line, and +5V to the bottom one. Add the standard 330 or 470 Ohm to the LED, and connect a resistor of much higher values to the base, e.g. 10kOhm. When the button is not pressed, there is no current flow through the base and the transistor represents a circuit breaker (the LED is not turned on). By pressing the button, a current of 260uA will flow through the base, which will allow higher collector current (8.6 mA) to flow and the LED will turn on.

Depending on the type of a semiconductor in the channel, we distinguish N-channel and P-channel FETs. The channel is actually a name for the path from the drain (D) to the source (S). They are unipolar because their operation is determined by the flow of only one type of charge carriers, electrons in N-channel or holes in P-channel FETs. Another classification is on the enhancement-mode and depletion-mode FETs, and they differ when the voltage between G and S is zero (Vgs=0 V), enhancement-mode FET will not conduct, there is a circuit break, while the depletion-mode FET’s channel will conduct in that case. Just like bipolar transistors, FETs are used to amplify the electrical signal, or as switches. However, for FETs, it is important that the current does not flow through the gate(G), while in bipolar transistors we have the base(B) current. Depending on the construction, there are two types of FETs: JEFT (Junction FET) and MOSFET (Metal-Oxide-Semiconductor FET). Check a very interesting video about FETs. ——> Introduction to Field Effect Transistors

JFET
Each JFET operates in a depletion-mode, so the channel is the most conductive when Vgs=0. JFET is made of a conductive channel of one type of conductivity, and another one, of an opposite type is connected to it. This pn junction is depletion polarized and in this way the depleted area that “narrows” the conductive channel increases, thus increasing the resistance. We can picture this as a variable resistor that depends on the voltage. Take, for example, one n-channel JFET. The more negative the Vgs, the narrower the channel, and less current flows through the channel. 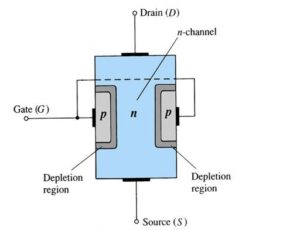 MOSFET
Learn more about MOSFETs in our previous tutorial “What is MOSFET?“.