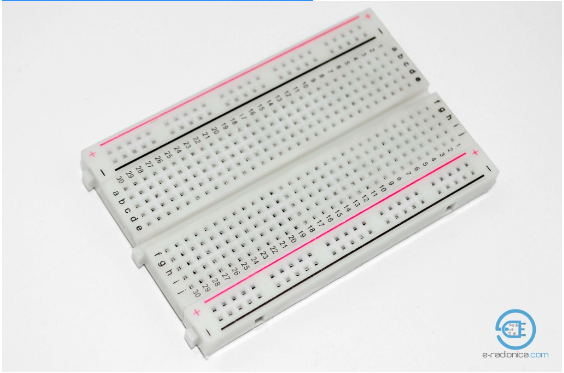 Solderless breadboard is the most used tool for connecting temporary electrical circuits. It comes in different dimensions and sizes, but basically they are all the same. 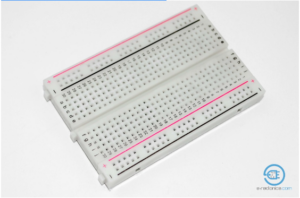 As seen in the pictures, it consists of plastic housing on the upper side of which are many holes made to insert pins of different components. The space between two holes is standardized and is 2.5 mm. Except for that, the space is aligned with the space between pins of most integrated circuits and components.

The holes in the interior of a breadboard are interconnected by a certain rule. As seen in the picture 2 and 3, we distinguish three basic parts of a breadboard which are marked with three different colors in the second picture. On each side of the board, there is a scope (marked with brown color in the picture) which consists of two sets of holes interconnected in such way that they form two vertical “rails” which we use for power supply. Usually, beside every “rail”, there are two lines, red and black (blue) along with symbols (+) and (–). Most of the holes on the breadboard in one line are not connected to the entire length, but they are interrupted in the middle (sometimes in more places) which must be checked before use. It is mostly about bigger experimental boards as seen in the picture below. The cleft is shown by interrupting the red and blue line. 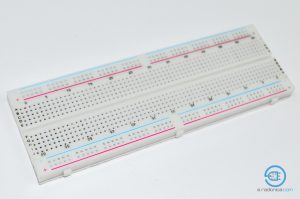 In the very middle of the breadboard is a vertical cleft which divides two scopes. Its width is standardized and allows us the insertion of integrated circuits. Holes within grey scope are connected horizontally, making two horizontal sets of five holes in the same row. Rows are often marked with numbers (1-60), and columns with letters (a-j). 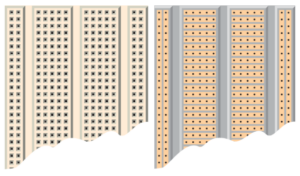